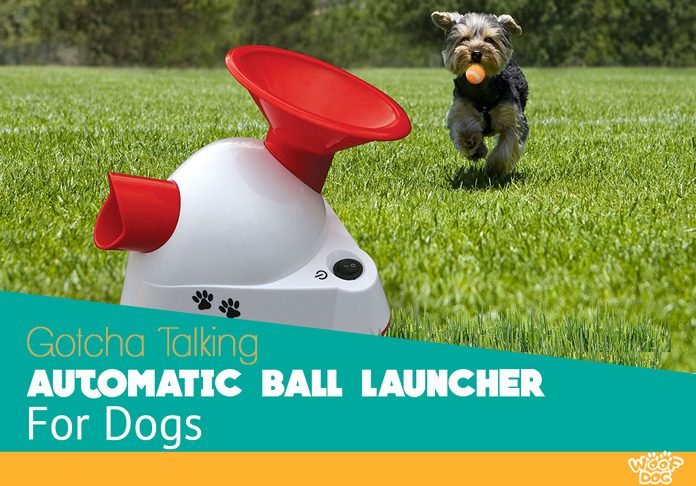 Are you an owner of a small dog, but don’t have enough free time to play with him? All is not lost – a purchase of a dog ball throwing machine is the solution. Fortunately, there are models specifically designed for the small breeds, and you don’t have to worry about the choking hazard with them.

Gotcha Talking is one of those machines – it has been designed with small dogs in mind, and is also one of the most affordable models that the money can buy today. We decided to get one for ourselves and check out all of its features, advantages, and flaws.

What is the Gotcha Talking?

As we mentioned, this is a product intended for the owners of smaller four-legged companions. Made out of plastic, it’s a lightweight and compact model that makes transportation an easy task. The fact that it’s not made out of expensive materials makes it one of the most reasonably priced devices of this type on the market.

Unfortunately, we couldn’t find much information about its manufacturer, which is a company called Etna. We noticed that they have already produced some pet-related products and that this ball shooter isn’t their first step into the canine world. The affordable price is precisely what makes this machine so popular among the users – you won’t have to give too much money for it.

A product that’s lightweight and compact might be exactly the thing you are looking for, especially if you’re a pet owner who travels a lot. Many models we’ve reviewed are made out of metal and are quite bulky, which makes transporting them a bothersome task. That’s not the case with Gotcha Talking, as it falls into the category of featherweight ball throwers.

The design of this model is one of the simplest we’ve seen so far. It’s a straightforward dog toy launcher that successfully combines the white with the red color, with a big, almost cartoonish-looking funnel on the top. It has a big on/off button on one side, a speaker on the other, as well as a logo featuring prints of the dog paws.

The speaker is one of the most exciting things here. As you can probably guess, this is a device that speaks – whenever the pooch puts the ball into the funnel, the machine will say “Good Dog” and shoot the ball out. The dogs like these kinds of things – our Fido certainly did. However, if you’d like to turn off this talking prompt, you can do it by using the particular switch that’s positioned underneath the machine.

Just like we expected, this model can be used both indoors and outdoors. The first option is available due to the presence of the electric plug, and the second because of the machine’s capability to use 4 “C” batteries. Unfortunately, none of these things are included in the package.

The product comes together with three mini-size tennis balls, which are 1 1/2″ wide. They are not saliva-resistant, and there’s a possibility that they’ll get stuck in the machine after some time. We would advise you to invest in the balls of better quality – like the authentic iFetch balls.

What Comes in the Box?

Seeing as it is one of the cheapest product of this type on the market, we didn’t expect to get a lot of accessories along with the model. That’s precisely what happened – the box contains only the following items:

The lack of the AC adapter or the rechargeable batteries might be a deal breaker for some, but remember that this is an affordable model and that the compromises had to be made somewhere. The box that the product comes in looks very nice, though – one would think that it contains a launcher of premium quality.

How Fido Liked It

Even though it’s cheap and simple, Gotcha Talking is a device that certainly does the job for which it was made for. The large funnel makes it easy for the dog to figure out how it works, although it doesn’t shoot the ball as far as we’ve expected. This makes the device much more suitable for indoor use, especially if you’re an owner of a smaller apartment and don’t want to have broken vases or windows.

One serious issue here is that the included balls aren’t saliva-resistant, and we think that this will render them useless after some time. Fortunately, there’s a solution – you can easily buy mini-sized tennis balls of higher quality online. They’re not that expensive and will last you for much longer than those that come with this thrower.

It’s of crucial importance to avoid using this machine with large breeds. They could easily choke on the included balls, so purchase this machine only if you have Dachshund, Pekingese, Poodle or any other small breed. It’s entirely safe for them to use this device, just like the best self-throwing toy for small dogs.

Those looking for an affordable ball play machine should consider purchasing the Gotcha Talking – it’s one of the most reasonably priced models we’ve reviewed so far. Due to its low price, the device comes with certain flaws – the box contains no AC adapter or the rechargeable batteries, and the included mini tennis balls aren’t the best ones we’ve seen yet.

However, this is a lightweight and compact thrower that does its job pretty well, and even plays talking prompts during the game of fetch. Operating it is a breeze, and you can use it both inside and outside your home. What more could one want? 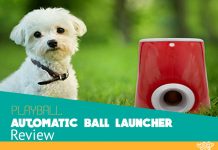 Playball Launcher Review – Is it as good as iFetch? 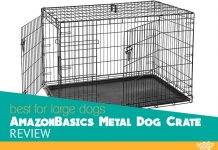 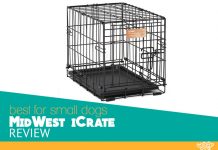