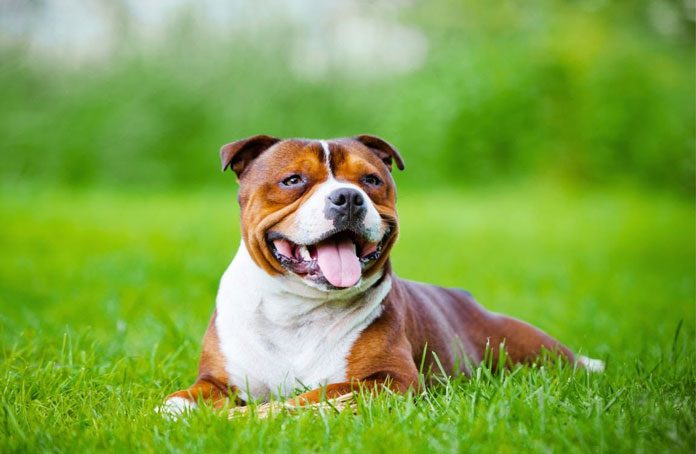 
Staffordshire bull terriers, or Staffies as they are affectionately known, are one of the best family dogs. They might have a bit of a bad reputation, but that’s all on the owners, not the dogs themselves. They’re fearless, fiercely loyal, and awfully fond of people. This loyalty means that they’ll do anything for their owner – and that’s where the bad reputation comes from. In the care of a loving owner, they blossom into a friendly, affectionate and reliable dog.

They were first recognized by the UK Kennel Club in 1935, but their early lineage goes back to at least a hundred years before that, coming from a mix of working dogs and bulldogs. It took nearly another forty years before the American Kennel Club recognized them as a breed in 1974. Despite the similar name, Staffordshire Bull Terriers are a separate breed to the American Staffordshire Terrier – they’re slightly smaller, and a little stockier.

Staffies have tons of personality, and are definitely not for those who want a more reserved dog! They’re incredibly affectionate once bonded with you, and like to show this through nuzzling, licking, sprawling on you and generally just being close. Despite their stocky build, they can be gentle where needed – they’re often nicknamed ‘The Nanny Dog’ due to their excellent nature with children.  They are easy to train, though not so much as guard dogs – their fondness for people tends to distract them from their fierceness! If anything, the one difficulty you may encounter with training is their tendency to want affection even whilst on their best behavior (and if that’s the biggest problem you’re going to have, it’s not all that bad). One thing that is worth noting, however, is their strength. Whilst they are capable of being gentle especially with children, they are incredibly strong and if they get excited and decide to jump on you, you’ll definitely notice. Even though they are not aggressive if not provoked, due to their strength you may sometimes have to buy a stronger kennel to keep them safe while traveling for example. Ordinary crates won’t do the trick here.

Whilst Staffies puppies are gorgeous, there are so many Staffies in rescue centers that we definitely recommend checking out your local one first. The staff will be able to give you an assessment of their personality and how well trained they are, and you’ll be able to meet them before you decide to take them home with you. Not all Staffies take to kennels particularly well – they can often come across as very shy and quiet, but once they’re in a stable home they’ll quickly warm up. If you have your heart set on a puppy, it’s still worth looking here first – with their (undeserved!) bad reputation, Staffies often get adopted less quickly than other breeds so even the puppies tend to stay around a little longer.

If you do decide to buy one, you’re looking at around $1000 – $3000 in cost upfront, plus potential medical bills for vaccinations, spay/neutering, etc. See if you can meet at least one parent (the mother, if possible) to judge her temperament. A good breeder should also be able to tell you about any possible medical issues that may come up – Staffies can be prone to hip dysplasia and L-2 Hydroxyglutaric Acidura, and if the breeder is unwilling to discuss this then you should avoid them.  Any good breeder should be using DNA screening to ensure their dogs do not carry the gene for and L-2 Hydroxyglutaric Acidura, as it has no current cure.

Whilst house training Staffie puppies can be fairly easy, there are some additional bits of training it’s advised to do. They’re not the quickest breed to get on with other animals, so it’s advised that you socialize them as much as possible whilst they are puppies. (It’s here that getting a rescue has an advantage – they will have often tried to socialize them where possible in advance).  They also like to chew on things so make sure to spend some time teaching them what is okay and what is not okay to gnaw on. We suggest getting some tough chew toys so that they don’t wear through them easily, and avoiding playing with them in ways that encourage them to chew on you, their leash, or anything similarly breakable.

Since they’re such a strong breed, it’s definitely worth starting leash training as early as you can – making sure they don’t pull on the lead is key to enjoying your time walking them! Lots of positive reinforcement works wonders on these dogs, and you’ll soon have a companion happy to trot along at your side.

One thing to take note of is that Staffies are very intelligent, but can be a little bit stubborn. Patience and positivity are the tricks to training them well, and building up the bond between you will go a long way – they love to please. Because they’re so clever, they can get bored, so make sure you’re engaging them. It might be worth going beyond the usual ‘sit, stay, fetch’ commands and seeing just how smart they can be.

Staffies are generally a healthy breed, but there are a couple of things they have a tendency towards, such as the aforementioned hip dysplasia. Keep an eye out for early symptoms of:

On average, Staffies live for around 12 years, and grow to a height of around 14-16 inches at shoulder blades. They have a short coat that doesn’t require much grooming – dirt will usually brush out, and brushing them once a week should remove any loose hair.  If they’re healthy, the coat should be glossy and smooth.

Despite being small in height, they have a lot of energy and need at least an hour of exercise a day – ideally more! This makes them ill-suited to apartments unless you can take them out regularly.  However, they also shouldn’t be left as an outdoor dog due to their fondness for companionship. If you do have a garden, make sure to reinforce all the fences at the bottom, as, like most terriers, they like to dig.

Being a Staffie Owner

All dogs come with their own challenges, but with a Staffie, you’ll have to be prepared to have others comment on your choice of dog – many are not familiar with the loyal, family dog that they truly are. You may find other dog owners reluctant to let their dogs interact, or people steer away when you pass. This is the unfortunate side of being a Staffie owner, but we think it’s more than made up for by the dogs themselves. After all, what other species is so smart, so loyal and so funny to live with? It won’t take long for the doubters around your to warm up – especially after they find themselves nuzzled and fussed by such a lovely breed. 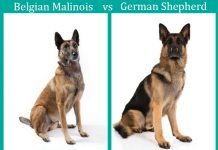 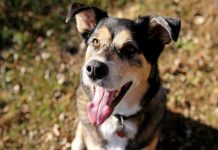 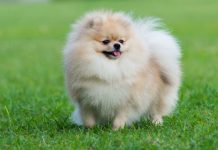